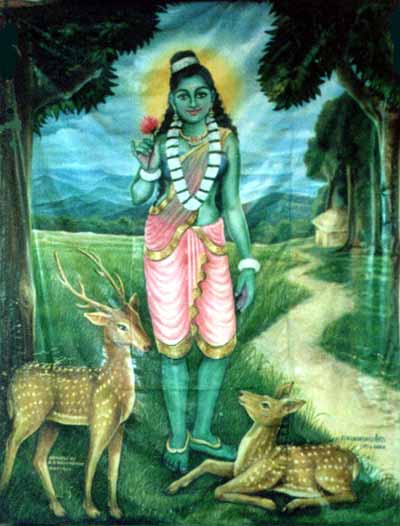 If anyone could be found who fully appreciated the greatness of Valli Amma, heroine of the never-ending Murugan Tiruvilaiyadu, she or he would hardly pretend to understand it.  Scholars and devotees alike, however, like to measure and understand even the most incomprehensible subjects.  So naturally many people would also like to know what exactly attracted the great god Murugan Himself to quit heaven and take up residence on this earth.

Is Valli a girl-turned-goddess, or is she goddess-become-girl? Her life story comes to us in different versions, suggesting different conclusions.  Yet literary as well as living oral traditions all agree that this extraordinary being has lived from prehistoric times onward to this day as the undying spirit of a twelve-year old girl.  Even today there are many who will vouch for her mercy, mystery, and majesty.

Chief among her living devotees, beyond a doubt, is none other than Lord Subrahmanya, the great god of remote antiquity Murugan Peruman Himself.  Or, at least, such is the view of the saintly poet Arunagirinathar, author of Tiruppukazh and arguably the greatest revivalist of Murugan bhakti in post-Sangam times.  And yet it appears that Arunagiri was actually at heart a shakta intent on describing the transcendental glory of this simple girl who stole the Master Thief of Heart's own heart and, by the intensity of her undying love, compels Him to this day to remain firmly fixed in this small corner of our boundless universe.

The age-old story of Valli and Murugan fairly bursts with archaic motifs that identify it unmistakably as the product of these prehistoric people. We learn from the story as it has been handed down that Valli, the heroine or talaivi, is found in the jungle as an infant and raised by Vedars, indigenous hunter-gatherers who already worship Murugan ‘the Tender Youth' as their ancestral hunting god even before he enters the story in person as its hero or talaivan.  This also suggests a cyclic view of time wherein archetypal events or motifs perpetually recur in fresh guises. 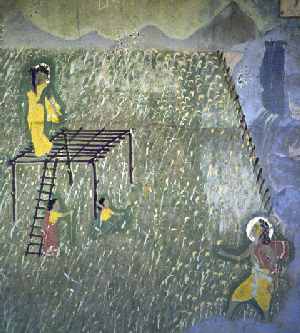 Smitten with love for the unseen god, Valli makes a vrata or solemn vow to marry no mortal man but only the great god himself. When Valli is twelve, her family sends her according to the Vedar custom to guard their small field of millet in a jungle clearing against marauding birds and beasts.  Fully aware of the girl's pure intention, the god slyly incorporates himself as a handsome young hunter and enters the scene to court the winsome lass.  But Valli does not recognize the god in disguise and, intent on her vow, indignantly orders the stranger to be gone.

When Valli's kinfolk suddenly appear, the shape-shifting god first transforms himself into a venkai tree and then assumes the form of an aged ascetic in order to win the confidence of the Vedars even while stealthily drawing ever closer to the innocent yet wary maiden.  Yet even despite the god's cunning disguise, Valli holds fast to her vow and will not allow him even to touch her.

Finally, Velan teams up with his rival elder brother, the wily elephant-faced god Ganapati, to startle Valli and trick her into promising to marry the old ascetic Murugan.  The moment she gives her consent, he reveals his divine form and together they consummate their love for one another.  Their passionate romance continues daily until at last the millet ripens and Valli must return to her parental hamlet at the foot of Valli Malai where the story takes place,

Their clandestine love affair (kalavu) at an end, Valli returns home with a heavy heart.  Her mother notices Valli's unhappiness and calls a soothsaying woman who diagnoses Valli's love-sickness (kama noy) as a case of possession by a cur (evil spirit) and recommends that a velan or shaman-priest be called to perform a veri dance ceremony to appease Murugan and dispel the cur.

Meanwhile, Murugan returns to the millet field and, failing to find Valli there, criss-crosses Valli Malai in anguish searching for his beloved.  In his Kantaranuputi, Arunagiri touchingly describes the pathetic scene of the great god held in the throes of love-anguish for Valli as he wanders among the mountain pools, waterfalls, and green fields of millet dotted with watcher's platforms (paran).  Evidently, whatever may be the attraction of heavenly absorption in non-duality. Lord Murugan evidently prefers this earthly realm of duality with its pains of separation and joys of reunion.

Finally, Murugan traces Valli to her home and enters at midnight to ‘steal' Valli and elope with her to the wilderness of Valli Malai. The Vedars, awakening to find that the pious stranger was really a rogue in disguise, follow in hot pursuit but are all struck dead when Murugan's cock-emblem crows.  However, by her mere touch, Valli restores her beloved kinsmen to life.  All marvel at this revelation of divinity in their midst and joyously prepare to celebrate the divine wedding in customary Vedar fashion with a feast of honey, millet, fruit and venison.

In his Kantaranuputi (verse 36), Arunagiri tells us that Murugan, the Supreme Lord whose lotus feet Brahma and other gods place upon their heads, places on his own head the feet of the Hunter's daughter.  And as we learn in verse 35, Lord Murugan himself has made a solemn vow to praise no one except Valli Amma. Hence, the central importance of the vow or personal covenant between the devotee (in this case, Murugan) and the divinity (here Valli) continues to this day, as many thousands of devotees can attest that a vow is the most certain way to ensure divine grace or arul.

Patrick Harrigan has been acting editor of the Kataragama Research Publications Project since 1989.